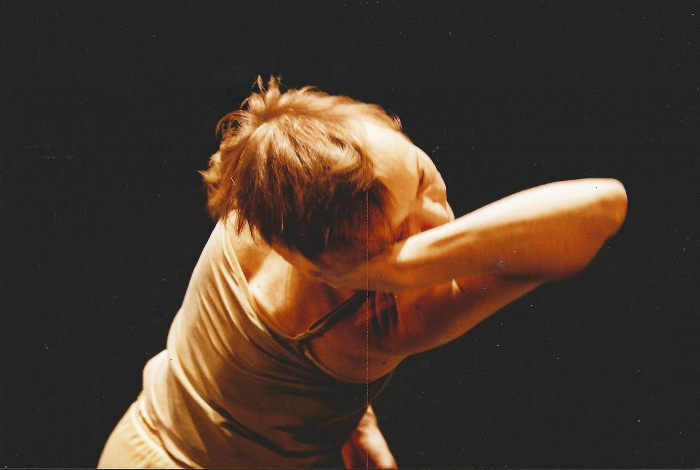 The unimaginable has occurred, and the feeling of forlornness is overwhelming: pure emotion, no images. Nailed down on the spot; there is no return, what comes is completely veiled. The above is hopeless and the below seems endless:

In the centre of the abyss, or at its edge or with it. The finality of death becomes permeable, open, reversible, the finale disappears and death is received: from anguish to indefinite space.

A strange thing has happened in the work of Riki von Falken since her solo “White Linen” in the year 2000: although the theme treated is the absolute, personal experience and emotion, i.e. the explicit grappling with space and architecture is no longer in focus,  the language of the body appears more reduced and transparent than ever. In spite of working on a purely inner world, in spite of the vulnerability of this body in which Riki von Falken dances before her public, it is never illustrational or private: the way she turns emotion into motion, condensing it into a form both cristalline and fragile, transmits itself with the most immediate urgency.

With the kind support of the Senatsverwaltung für Wissenschaft, Forschung und Kultur Berlin, Theaters am Halleschen Ufer and Tanzfabrik Berlin.