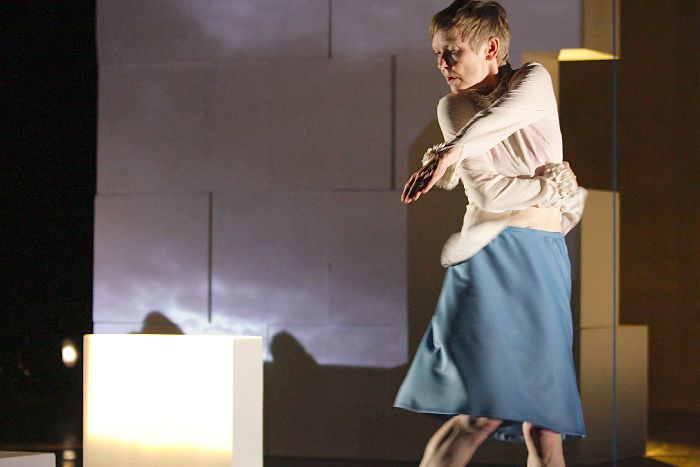 One cube, two figures, three places, four visions. A dancer on the stage and her ‘virtual self’ on the screen, represent two different moments in the life of a single woman. Separated from the outside world, she retreats into an inner conflict between a lost present and a fictional future. The stage evolves into an obscure landscape of perceptions, in which body and image complement, decompose, devour and expectorate each other. A journey begins into alienated space, filled with the fragments and ruins of memory, from which only one of the two figures can return.

In this, her new dance piece The Geometry of Separation, Riki von Falken explores the problematics of exclusion – a fear that lies at the very heart of contemporary life. In collaboration with the film maker Mareike Engelhardt she creates a fictional dialogue between dance and video, in which the dancer on stage and the dancer within the film encounter each other as their Alter Ego. Confronted with an outside world that is uninhabitable, she develops her own language of movement, both abstract and ironical, in an effort to integrate herself into these unreal and psychological spaces.

Press review The Geometry of Separation