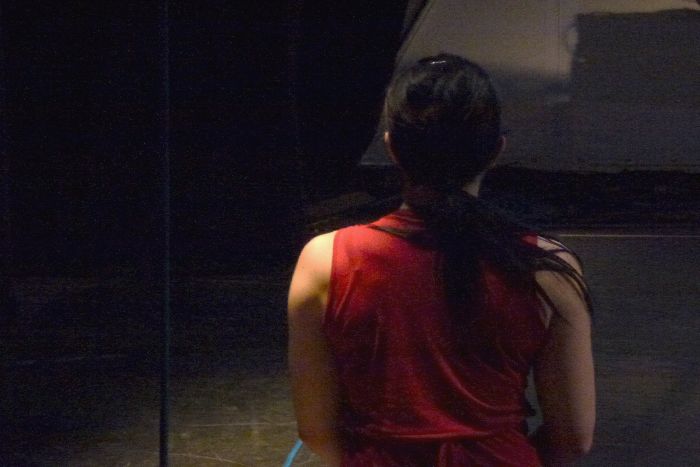 When the SPACE breaks …

The language of my body becomes an ECHO of a time, which was a special, particular experience because it was so extreme. In New Zealand the rehearsals for a piece with the Southern Lights Company in Christchurch were cancelled following the earthquake on 4th September 2010.

“I was woken abruptly and could not move. Imprisoned in my bed, I sat upright and watched the walls moving to and fro, a movement accompanied by an incredible sound. The space moved. The sound was swallowed by a sudden stillness. The movement of the space was no longer perceptible. The stillness was like a chasm. Impalpably, it absorbed my feeling of orientation. The space had changed. Although it looked exactly as it had before, apart from a few cracks in the walls, yet something had been taken from it. As if the vibrations and trembling had inflicted a wound upon it. The SPACE became my MIRROR. As if I had become part of the space.”

I wish to develop an acoustic and choreographical landscape, in which the images of the earthquake are stored in every dancer. In this way, the movement or the movement material are reminders of a “limited space”. The “construction” of the movement is captured precisely in its detail. Through the “heightened” perception a dialogue arises, which continually re-defines and re-assembles the body in its variety of possibilities of movement.

The sculpture “Echo”, developed in 1981 for the Arts Centre in Christchurch, is for me an image of my theme ‘when the space breaks’. Neil Dawson built the house purely with ‘lines’ and it could even be a drawing. It sways; it has no floor, parts of the walls and of the roof are missing. Depending on the position of the recipient, the perception changes and a game begins with the displacement of perspectives.

Echo I is the first part of a trilogy, the second part will be created and performed in Malaysia and the third in Germany.

Riki von Falken has been choreographer and dancer if her own pieces since the beginning of the 90ies. In her first six solos, which were partly based on distinct architectural spaces, Riki von Falken developed a clear and constructive form language, which continually aims at finding a balance between the inner and outer world. (…)her movement language has nothing heavy to it and it is free from forced expressionism, instead it features a lightness, transparency and even elegance. (Katrin Bettina Müller, critic, TAZ)

Katja Kettner is a dramaturg based in Berlin. She is interested in transforming the language and ideas of dance into words. She has been collaborating with Riki von Falken for three years.